The origin of this motorcycle brand, born in Barcelona and is named after an order of medieval chivalry, stood in 1945, when the chips made Pere Permanyer and Francisco X. Bultó is crossed on the road. The first had already been introduced to the world of automotive manufacturing with gasifier-about devices that allow vehicles to operate with coal gas and then with engines for bikes and scooters. His skills as a businessman and a passion for petrol Bultó were the perfect combination for the creation of the new brand Montesa, which debuted on the market with the model A-45 of 98cc and separate three-speed change. Gradually, motorcycles were evolving and production increased significantly, reaching a very long saga manufacture of models has remained to this day, under the new name since 1986, Montesa-Honda.
The model takes this report is especially interesting because it is considered the transitional link between Elan and Impala, the flagship brand series. This is the Elan 110 produced in 1959, the first motorcycle manufactured Montesa after the departure of Francis X Bultó. It maintains the same 125cc engine than its predecessor, the Dash 91, but the chassis is completely new, highlighting the rear swing double buffer and a clearly more powerful brakes. With this bike came to exceed 110km / h factory even launched a kit to get more speed out of this great sport. But to compete on the track with its great rival, the Whiplash 101 Bultaco, this Elan 110 a special version, the 110 S, popularly known as "monotube" for carrying one larger diameter exhaust is derived.

The competitiveness that quickly established between these two brands during the decade of the 60s and 70s, which also joined OSSA, significantly increased the level of quality of all the models, raising the prestige of Spanish motorcycling worldwide to unimaginable a few years ago. 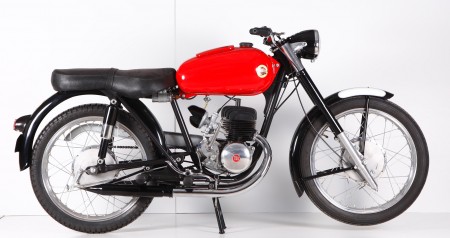